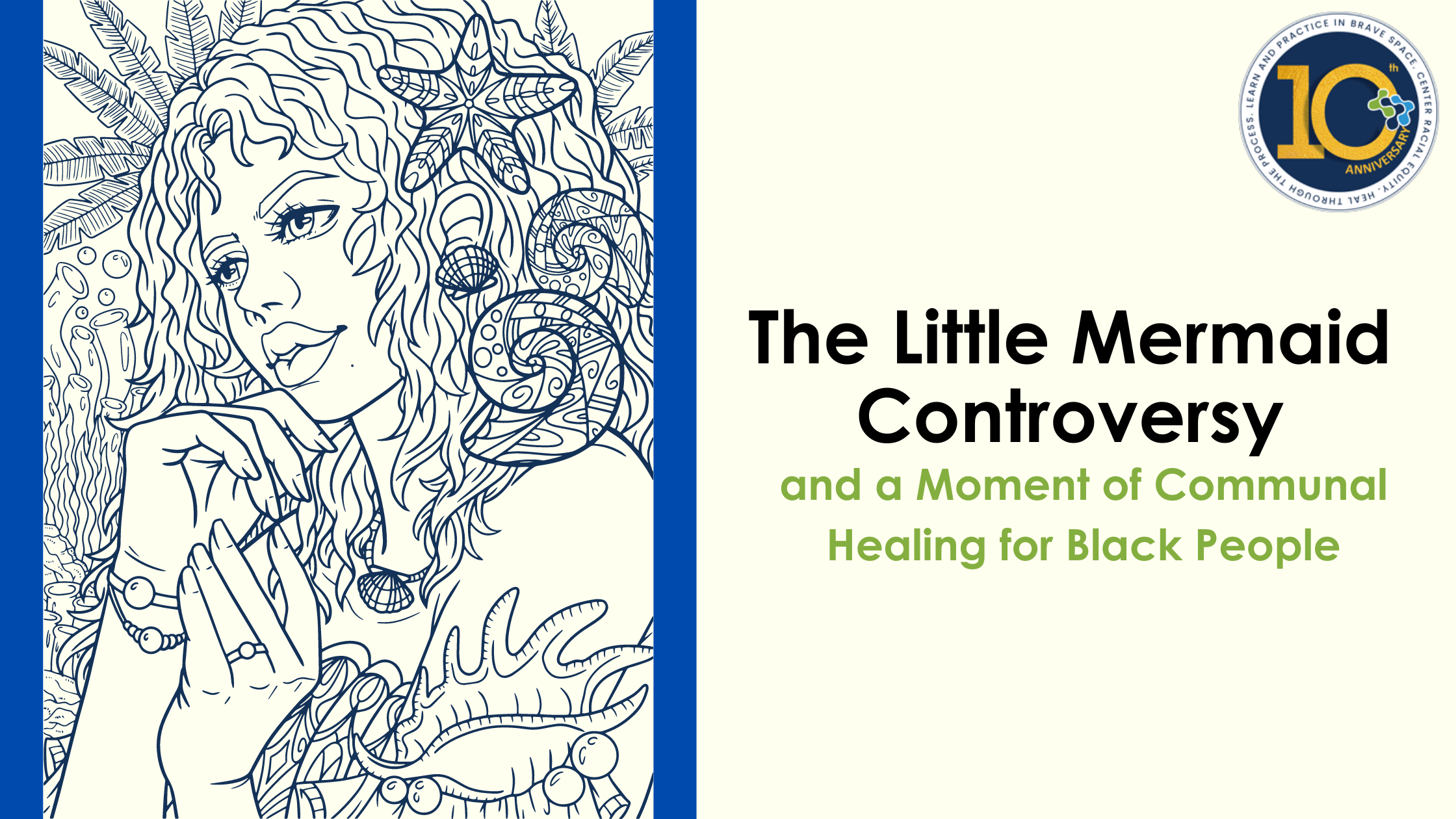 Less than a week after the trailer for the upcoming live-action remake of 1989 classic The Little Mermaid, it gained over two million “dislikes” on YouTube. It holds the record for the most disliked film trailer for any North American movie.

Before The Little Mermaid, the movie trailer with the most dislikes held strong with Ghostbusters, a 2016 remake of the classic 80s franchise featuring – gasp! – a cast of female main characters. But that’s a different conversation.

This conversation centers around the issues with The Little Mermaid – specifically, the casting of a Black girl, Halle Bailey, as the beloved Ariel and fan backlash.

What should’ve been a celebratory moment for a talented young artist and a win for Black girls became a whirlwind of vitriol and demands to replace the young actress.

Make no mistake. This is not because of issues with the film or Disney’s ongoing efforts to produce live-action remakes of childhood treasures, or the integrity of the source material.

The anger toward The Little Mermaid is solely because of a Black actress cast as the iconic redhead. Mermaids, elves, and intergalactic villains can’t be Black. Fantasy characters that exist only in the most imaginative minds in history can only be white.

Still not sure? There’s a Facebook group called Christians Against The Little Mermaid (Boycott Halle Bailey), an offshoot of the 100% honest group Christians Against Dinosaurs. I’d like to believe it’s a parody if not for the blatantly racist jokes and complaints.

The excuses rarely acknowledge racism, however. The backlash is shrouded in concern for the original Danish story that didn’t stay true to the source.

Never mind that the original animated version left out a lot of gruesome details.

Never mind that it was written by a gay man expressing his longing for a relationship condemned by society..

Never mind that Black Danes exist, that Ariel would be pale and translucent, or that mermaids and sirens exist in virtually every culture.

At its heart, The Little Mermaid has always been a metaphor for people who didn’t belong or felt “wrong,” trapped in a body or circumstances that prevented their happiness. Gay people, trans people, followers of devout religions with forbidden love…

It’s Hard to Be What You Can’t See

Belle, Aurora, Cinderella, Snow White – Disney spent 70 years showing white girls a princess version of themselves on the screen with Prince Charming. They absorb this media and internalize messages of what their lives should be or aspire to be like.

It wasn’t until the end of 2009 with Tiana and The Princess and the Frog that we saw a Black Disney princess. Just the mere presence brings pride, but it’s not enough to combat the effects of racial and ethnic identity development.

Lack of media representation negatively impacts self-esteem and views of racial or cultural groups. Scholars routinely assert that people from marginalized or underrepresented groups don’t pursue academic or career opportunities if they don’t see themselves represented in those roles.

For example, women (and especially Black women) who don’t see themselves represented in STEM fields may internalize the experience and believe that these careers are not appropriate for them. The same applies to government or art positions.

In addition, representation helps people find community support and validation in their groups. It reduces negative stereotypes about other groups. The more exposure people have to groups that are different from them, the less likely they are to hold onto prejudice.

And when a group has been historically underrepresented in the media, visibility seems like a win. Even if they don’t see themselves in the particular role, having diverse stories from influential creators of color about People of Color – like a Black mermaid – can inspire original stories in the audience.

If the represented group is only used to further storylines promoting stereotypes or inequities, it’s failing to address the systemic obstacles that keep people of color from realizing their potential.

Yemaya and a Moment of Healing

The Little Mermaid fairy tale may be Danish, but mermaids are part of diverse folklore and spirituality across many different cultures and time periods, including African culture.

Yemaya is Regla de Ocha or the Lucumí religion’s ocean goddess mermaid. Part of the Afro-Caribbean Yoruba religion, Yemaya was brought to the New World by enslaved Africans as early as the 16th century.

As with most oral traditions, Yemaya’s attributes, origin, and manifestations vary depending on the part of the world, including her name. Yemanja and Yemoja are also used.

She is believed to be the protector of the African people who died in the water during the Transatlantic Slave Trade. Her strong and protective energy can be found everywhere, especially in the presence of oceans and lakes.

Dubbed “Mother of All,” she cleanses sorrow and helps in matters of self-love, emotional wounds, trauma, and healing work. In depictions, she rises from the sea as a mermaid with dark skin shining under the moonlight, radiantly ruling over her domain with grace and maternal wisdom.

Symbols and iconography are essential for grounding spiritual beliefs into something tangible. How fitting then that Halle Bailey is The Little Mermaid. It’s more than showing little Black girls a version of themselves as beautiful fantasy creatures in a love story.

Halle is a symbol of Yemaya to cleanse the sorrow of Black people, promote self-love, and heal generational trauma. When we see Halle, it’s a communal care moment that helps Black people heal.