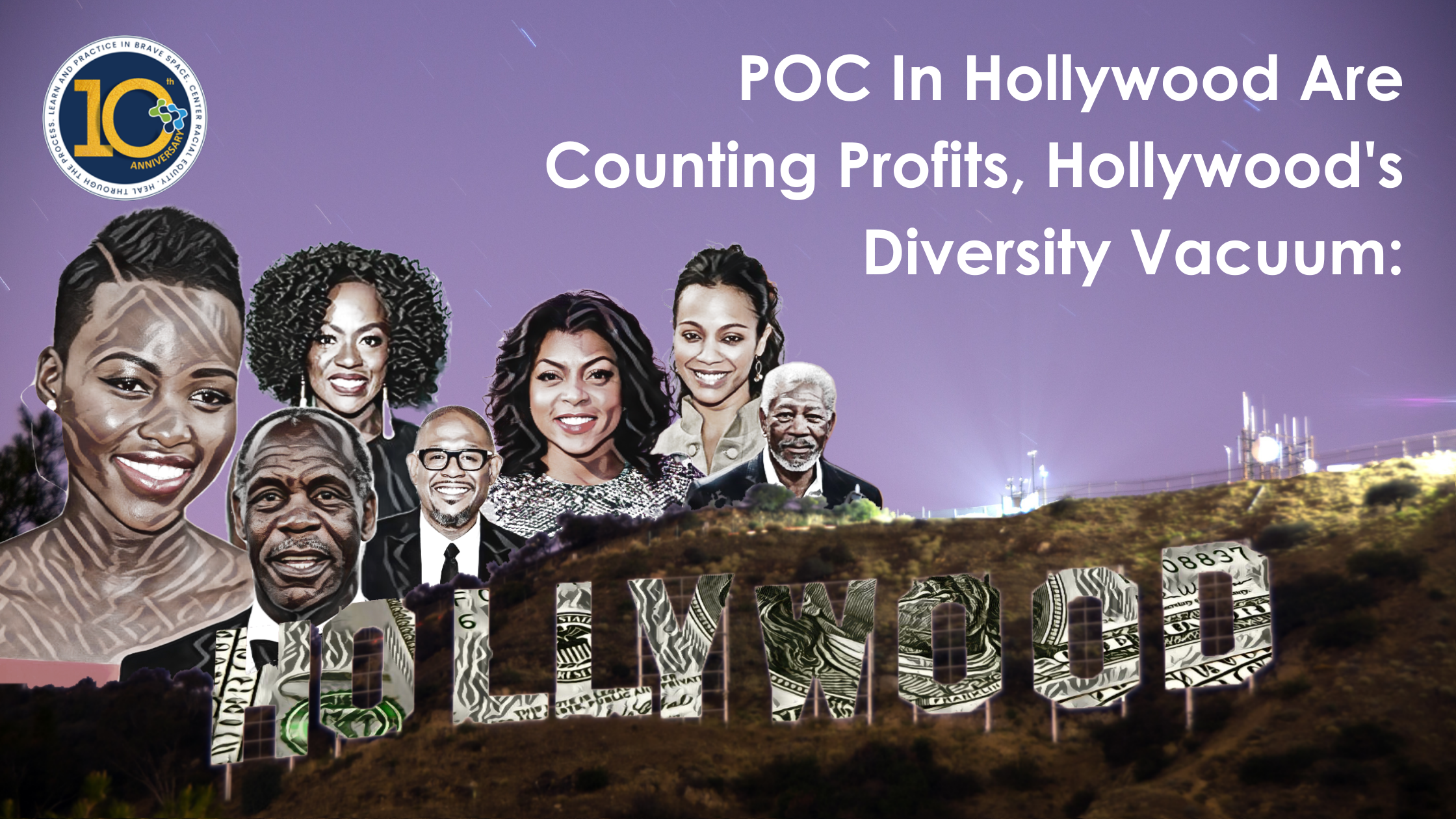 Hollywood has always been a tough place for black actors. White men have historically dominated the entertainment industry. Even when they do not overtly discriminate against black actors, the reality is that most roles are written with white actors envisioned as the lead in these roles in mind.

Diverse representation in film is essential for many reasons. First, it’s good for business and makes for better art. But it is not just about the bottom line: More diverse movies will also appeal to a wider broader audience. There are many reasons why you should diversify films to include cast and crews of color. For example, it’s the right thing to do and will help you make better films. Diverse casts and crews make more money.

From the start of cinema, there have been movies that were more diverse than others. This is true for all genres and for many reasons. The most obvious is a lack of representation in front of and behind the camera.

Since audiences respond to characters they can relate to, studios must hire more diverse filmmakers so that they have access to stories with different perspectives.

But it’s not just about hiring people who look different or come from different backgrounds; it’s also about being open-minded when it comes to casting choices and giving opportunities to actors who might not be considered “bankable” because they do not fit into a specific demographic group.

Women have been a part of Hollywood since its inception, but they haven’t always had the same opportunities as men. When it comes to roles, black women have been portrayed as maids, and sassy friends. Instead, women have been relegated to supporting roles as wives, mothers, or even villains. They have also been stereotyped by their race, gender and sexuality.

As a result, many black actresses have decided to create their own films so they can be seen as strong characters who are not sexualized or portrayed as stereotypes. For example,  Viola Davis’s film “The Woman King,” tells the story of how Nanisca trains the next generation of recruits to fight against a foreign enemy determined to destroy their way of life. A group of all-female warriors protects the African kingdom of Dahomey with skills and fierceness unlike anything the world has ever seen.

It is no secret that the film industry has a diversity problem—and when you look at the numbers, it becomes even harder to deny: women, people of color, and people with disabilities are all still underrepresented in Hollywood. But while this is all true, it is also important to recognize that there are black women who have been working hard for decades to ensure their stories get told—and they are finally starting to see some success!

In recent years, there has been a shift in how we see women in film — both on screen and behind the scenes. But there are still problems with representation for women of color.

So why does this matter? Well, studies have shown that diverse stories impact people across all demographics positively:

When was the last time you watched a significant motion picture in the action genre that portrayed an all-black female cast in leadership roles, showcasing their unmatched strength, intellect in STEM, and out-of-this-world storytelling that captivates and makes you feel something?

The Woman King is that movie. The prominent Gina Prince-Bythewood directs the Woman King, an empowering film that shows the diversity, inclusion, and equity of black females in Hollywood on both sides of the camera. But how did we get this gem of a movie into existence?

Isn’t it easy now for a black film to be made?

The Oscars have improved over time in terms of representing society’s diversity of culture, but Hollywood needs to recognize the diversity in our country and reflect that on-screen. For example, Black Panther has garnered critical acclaim from critics and moviegoers alike because it highlights an African nation that values innovation over tradition and includes people from around the globe who look different than one another despite being part of one nation under Wakanda’s leadership. However, while there is more representation than ever, there’s still room for improvement.

The Woman King faced many challenges from inception to the big screen. Hollywood Reporter reported that Cathy Schulman, one of the film’s producers, recalled studio executives wanting to give the movie a much smaller budget and cast more well-known light-skinned actresses. Schulman, Davis, fellow producers Maria Bello and Julius Tennon all felt this was historically inaccurate. The movie takes place in the West African kingdom of Dahomey during the 17th to 19th centuries.

Make it make sense because things are not lining up. It is instances like these that prove Hollywood is taking baby steps when backing black projects defying the status quo. Spoiler alert: The Woman King brought in 19 million opening weekend at the box office, surpassing what analysts predicted.

Black women aspire to be represented in movies and at the Oscars. We want to see ourselves in roles and casting opportunities, not just as extras or fluff characters. As a result, black actresses and actors are taking roles outside of the box office and creating a new wave of movies to be made.

One example is Tyler Perry: an actor, writer, producer, and director who has been making movies about black families for over 20 years. He has made more money than any other African-American filmmaker in history! But despite his success, he still has trouble getting his movies made at major studios like Netflix and Amazon because they don’t think his audience will be big enough (which is a little ironic considering how many millions of dollars he has made them).

Another great example is Ava DuVernay: she directed Selma and A Wrinkle in Time, which both did well at the box office (thanks mainly to her ability to tell stories about black girls that resonate with white audiences and black ones).

Black women are having a moment. From Issa Rae and Lena Waithe to Tracee Ellis Ross, Ava DuVernay, and Shonda Rhimes, black women tell their own stories and shape their destinies. As more platforms for entertainment emerge, and more content is created, it is essential to reflect on the history of black women in the entertainment industry. They have been instrumental in shaping how we see and understand race, gender and sexuality through their roles as actresses, directors, producers, and writers. But despite their contributions to the industry, they are still fighting for equal representation on screen.

Black women make up only 14 percent of all lead roles in movies released from 2007-2018, according to a study by USC Annenberg’s Media Diversity & Social Change Initiative (MDSC) and ScreenCrush. This figure is even more dismal when you look at leading roles in studio films: only 11 percent are played by black women.

The lack of representation in Hollywood can be attributed to the lack of opportunities given to female filmmakers and directors who are people of color (POC). In fact, according to MDSC research, there were only five black women directors who directed more than one feature film between 2007-2018.*

It is no wonder many people fail to recognize how much influence black women have had on our culture because it’s not represented.  The representation of black women in popular culture has historically been a catalyst for driving inclusion. In an interview with the New York Times, actress Issa Rae, best known for her role in HBO’s Insecure, explained how she had used her platform to promote black women’s brands and products. In addition to fostering black women-owned businesses through her work and social media, Issa Rae also uses her platform to promote important causes in her community. For example, she recently partnered with the nonprofit organization Black Girls Rock! (BGR!). The organization works to raise awareness about positive images of black women in media so young girls can see themselves reflected there too. Her commitment to championing POC and women with needlepoint moves on her platform every chance she gets is why movies like The Woman King have space to exist.

However, the emergence of new types of roles did not mean that all stereotypes disappeared overnight. The lack of diversity makes it difficult for black women to feel like they belong in a space. With the representation of movies, all women of color can be seen, heard, and showcased as more than just what society perceives as black women.

Hollywood is a powerful force that has a direct influence on shaping public opinion, and it does so by using visual and auditory cues. Hollywood has historically influenced how people view race and race relations in America through movies, television shows, music videos, and other forms of media. As a result, diversity is one of the most critical aspects of our country. It is what makes America complex and outstanding all at the same time. Diversity is all around us. It is in our families, workplaces, and communities. It is why we can live in so many different places-from big cities to small towns-and enjoy the countless benefits of living in a diverse community.

In 2012 the motion picture association established The Diversity, Equity, and Inclusion program led by John Gibson, Vice President, External and Multicultural Affairs. A key focus of this program is to support the MPA’s commitment to diversity and inclusiveness. In addition, the MPA Diversity and Inclusion Committee provides strategic direction for diversity initiatives across the organization.

While we can’t know for sure, the future of movies and the POC who tell them and portray them looks to be in good hands. If there’s one thing we can learn from those who have preceded us, it’s that the future of movies is bigger, better, and more beautiful than ever. Therefore, the onus is on us to ensure that we keep taking bold steps to ensure that we bring that vision to fruition. We want to be the preferred option in Hollywood and expect to see an expansion of the kind of content coming out with diversity and inclusion at the forefront, providing variety to a genre primarily confined to one perspective for far too long.

View posts by The Team